The Hidden Sense: Synesthesia in Art and Science
by Cretien van Campen 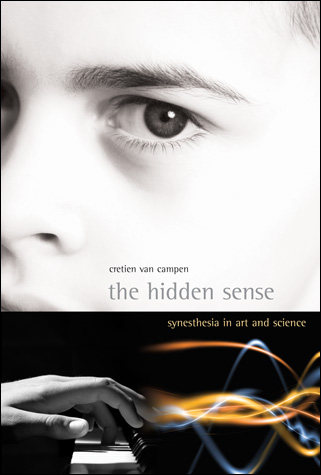 What is does it mean to hear music in colors, to taste voices, to see each letter of the alphabet as a different color? These uncommon sensory experiences are examples of synesthesia, when two or more senses cooperate in perception. Once dismissed as imagination or delusion, metaphor or drug-induced hallucination, the experience of synesthesia has now been documented by scans of synesthetes' brains that show "crosstalk" between areas of the brain that do not normally communicate. In Synesthesia in Art and Science, Cretien van Campen explores synesthesia from both artistic and scientific perspectives, looking at accounts of individual experiences, examples of synesthesia in visual art, music, and literature, and recent neurological research.

Van Campen reports that some studies define synesthesia as a brain impairment, a short circuit between two different areas. But synesthetes cannot imagine perceiving in any other way; many claim that synesthesia helps them in daily life. Van Campen investigates just what the function of synesthesia might be and what it might tell us about our own sensory perceptions. He examines the experiences of individual synesthetes--from Patrick, who sees music as images and finds the most beautiful ones spring from the music of Prince, to the schoolgirl Sylvia, who is surprised to learn that not everyone sees the alphabet in colors as she does. And he finds suggestions of synesthesia in the work of Scriabin, Van Gogh, Kandinsky, Nabokov, Poe, and Baudelaire.

What is synesthesia? It is not, van Campen concludes, an audiovisual performance, a literary technique, an artistic trend, or a metaphor. It is, perhaps, our hidden sense--a way to think visually; a key to our own sensitivity.

Order your book from:

Reviews
" In keeping with Leonardo's mandate to foster the exchange between the arts and scientific investigation, The Hidden Sense explicitly considers the implications of aesthetic experience in general and of twentieth-century audiovisual media in particular for the manner in which we define and distinguish the senses."
Robin Curtis, in Senses & Society, 2011, Vol.6, issue 2, pp. 236-239

"The Hidden Sense by Cretien Van Campen and The Frog Who Croaked Blue by Jamie Ward are the latest instalments in a rapidly growing series of scientific and popular writings on a fascinating condition known as synaesthesia. […] In summary, we think both of these books will be an interesting and illuminating read for synaesthesia researchers, students and lay readers who are interested in learning more about synaesthesia. The two books, shaped by the different forms of expertise possessed by the two authors, complement one another and afford a synergy of understanding for those who have the pleasure to read these important contributions."
Daniel Smilek and Mike J. Dixon, in Trends in Cognitive Sciences 2008, Vol.12 No.10, p. 364-366.

This slim volume provides a good introduction to the fascinating phenomenon of synaesthesia in art and science. It is too brief an account to dig deeply into this complex area, but it does offer a wide-ranging and summative overview, from the accounts of synaesthetes themselves to the findings ofcognitive and neuroscientific research.
Simon Shaw-Miller, in The Art Book 2009, vol. 15, issue 14, p. 75

"This intriguing book is composed of a well organized reader-friendly text and it greets its audience with a concise table of contents that informingly guides the reader as soon as the reading journey starts. [...] This book with its analytical approach to this phenomenon, reports of experiments, illustrations, diagrams, theoretical information, personal synesthetic experiences will appeal to psychologists, neurologists, artists, instructors,child specialists, parents, musicians, software writers, mathematicians. Futhermore the book will definitely make the reader “look-see-smell-touch-feel” twice."
Necla Çıkıgil, in Consciousness, Literature and the Arts, April 2008.

"The Hidden Sense: Synesthesia in Art and Science, by social scientist Cretien van Campen, is a straight-forward, readable account of a perceptual condition in which sensory modalities are crossed - for instance, when music and other sounds are experienced as colors."
Nancy Princenthal, "Art and Science, On Speaking Terms", in Art in America, April 2008, pp. 45-56.

"Van Campen has succeeding in writing a book that has quite literally changed the way that I think about the world.  His careful exploration of the condition of synesthesia -  incidentally, he is a synesthete - unearths a new and strange world of experience that most people cannot access.  By taking the time to explain the complexities of the condition in all of its different manifestations, The Hidden Sense offers a tantalising glimpse into a previously inaccessible world of experience."
Tim Roberts in Media & Culture Reviews

“Strongly relying on the latest scientific experiments (brains scans) as well as on a lifelong personal research on and with synesthetes (persons being able of synesthetic perception), the author manages to offer a discussion of synesthesia that is of interest for the specialists as well as for the broader public. […] The author’s way of arguing finds always a good balance between direct experience (the testimonies of the many synesthetes with whom he has been working for many years now) and the scientific results of cognitive and neuroscientific research (of which he is able of giving very clear and readable reports and syntheses).”
Jan Baetens, Professor of Literary Studies at the Leuven University, Belgium in Leonardo, January 1, 2008

"Van Campen is a social scientist with some synaesthesia, who has thought deeply about the phenomenon, read widely, consulted leading scientists, and interviewed and tested ordinary and artistic people with many types of synaesthesia. 'Cases have been reported of synaesthetes who feel coloured pain, hear odours, hear tastes, taste sounds, feel sounds on their skin, hear images, and taste images', van Campen explains. He delves into this complexity with authority, subtlety, and charm, and the result is a generally accessible, concisely written, and thoughtprovoking read."
Andrew Robinson in The Lancet, December 1, 2007

"In The Hidden Sense, Cretien van Campen, a self-styled naturalist of synaesthesia, explores this ground, providing a gentle, insightful,
often personal, account of coloured words, smells, tones, pains, even orgasms, that will fascinate scientists, artists, synaesthetes and
others. Slowly, this deep, seemingly intractable, subjectivity yields to some phenomenology, simple questionnaires, elegant experiments, a
dash of neuroimaging, and much thought and reflection."
Chris McManus, Professor of Psychology and Medical Education at University College London, in NATURE, November 1, 2007

Endorsements
"Even readers already familiar with synesthesia will find much to learn from Crétien van Campen's The Hidden Sense: Synesthesia in Art and Science. In clear and lucid prose, van Campen provides shimmering descriptions of synesthetic experiences as he explores the complex interplay between synesthesia in science and, especially, synesthesia in the arts. Although several of van Campen's stances on the science of synesthesia are debatable and controversial, agree with them or not, reading The Hidden Sense will broaden and deepen one's understanding of this fascinating set of phenomena."
Lawrence E. Marks, Director, John B. Pierce Laboratory, and Professor of Epidemiology and Psychology, Yale University

"This is an extremely interesting, current, and well-written book that highlights a fascinating topic in synaesthesia research, namely the translation of synesthetes' experiences into art."
Hinderk Emrich, Department of Psychiatry and Psychotherapy, Hannover University, Germany

"This slim, sparkling, sonorous volume is wonderfully rich and attention-holding. The Hidden Sense will be of profound interest to cognitive scientists, musicians, and other artists for the dialogue it enjoins between their respective domains of expertise. But it will especially appeal to the general reader for the lucidity of its exposition of the art and science of synesthesia, and the lively accounts it contains of the everyday experience of synesthetes in their own words."
David Howes, Department of Sociology and Anthropology, Concordia University